A traditional Nyonya Cuisine Dishes restaurant and delicious Nyonya Pineapple Tarts House. Provide you a special and memorable dining with full of enjoyment. Here is the place that you can try a different of Homemade Nyonya dishes.

China has always traded with lands near and far across the globe. During the Ming Dynasty, as a diplomatic gesture to strengthen ties with the rich and strategic port of Malacca on the Malayan Peninsula, the Emperor of China betrothed his daughter Princess Hang Li Po to the Sultan of Malacca. The royal princess and her entourage of about 500 formed the first permanent Chinese settlement in Malacca at Bukit China or China Hill. These early Chinese settlers wed local Malay brides and gave rise to the first generation of mixed Chinese-Malays known as Peranakan, the male being known as Baba and the female as Nyonya,pronounced nyoh-nyah and sometimes spelt Nonya. The term 'Peranakan' originated in Indonesia for the descendants of immigrant Chinese who had married and integrated with local Indonesians. Akin to the Peranakan in Indonesia, these descendents of mixed Chinese-Malay had forsaken their Chinese mother tongue and spoke the local Malay language, assimilated Malay customs, culture and dress. Descendants of this early Peranakan community in Malaysia then married within their own community of Babas and Nyonyas establishing a strong hybrid culture proud of it's heritage.

It was around this era, that the rich and strategic trading port of Malacca, had attracted the attention of the Portuguese. The strong naval armada of the Portuguese soon captured Malacca, making it a Portuguese colony for the next 130 years. After Malacca fell to the Dutch, who took over from the Portuguese as the main European trading power in the region, the British started exerting their control in the area. In 1786 Sir Francis Light, representing the British East India Company, established British control of the island of Pinang, now called Penang, and opened the port to trade. The 1824 Anglo-Dutch Treaty with the British ended the Dutch presence on the Malay Peninsula. Two years later, in 1826, the British East India Company united Penang, Malacca and Singapore into a British colony, calling it the 'Straits Settlements'. The rest of the Malayan Peninsula remained under the control and rule of the Malay Sultans. Although the first Peranakan communities first proliferated in Malacca, many Babas and Nyonyas settled in Penang and Singapore - and therefore - were also called Straits Chinese.
Since many ancestral customs and traditions of their Chinese forefathers are still practiced, Babas and Nyonyas assimilated the local Malay way of life. The Malay language is spoken at home, though curiously interspersed with some Chinese dialect. The local Malay attire sarong kebaya is worn and many ceremonial traditions, such as weddings, are celebrated in traditional Malay custom. This unique marriage of cultures resulted in a novel marriage of cuisines, both Chinese and Malay, and is what is now known in Malaysia as Nyonya food.

Posted by Anak Nyonya Restaurant at 09:23 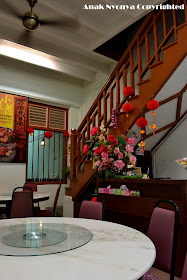 Leave Us A Message~~ 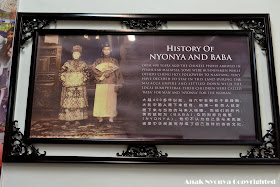 Over 400 years ago, the China people arrived in Penisular Malaysia. They decided to stay in this land during the Malacca Empire and settled down with the local bumiputeras. Baba-Nyonya is terms used for the descendants of late 15th and 16th-century Chinese immigrants to here. In Malacca, members of this community are called them as “Nyonya BaBa” instead of “Baba Nyonya”. Nyonya is the term for the ladies and Baba for the gentlemen. “Baba Nyonya” cultures are famous in clothing, religion, food, marriage, museums and political affinity.